Feline shifter Leo Mitchell is the pretty brother who attracts women with ease, but he’s turned picky. He suspects the mystery blonde hanging around Middlemarch is the one for him. If only he could grab the elusive female and seduce her. Oh yeah. He craves some hot, sinful lovin’ with the lady in black leather.

Assassin Isabella Black has harbored a huge crush on hunky Leo for ages. Because the timing sucked she’s watched him from afar, praying another woman won’t snatch the hottie away before she’s free to stake a claim.

Finally the pair meet. Isabella offers her naked body but Leo counteracts with a cup of tea. Seems Leo likes to call the shots when it comes to sex. A day later they’re finally dancing horizontally. It’s smokin’ hot, steamy, delicious—everything she’s ever wanted. Isabella is ecstatic until another assassin threatens to ruin her happiness. It’s life or death now. One wrong move and her secrets will destroy the Mitchells along with everything that has become dear to her…including Leo. 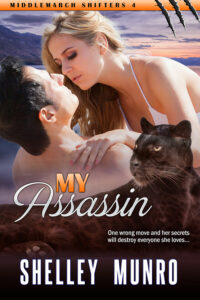 Leo lifted a hand in greeting but kept walking. Instead of heading for the lifts, he climbed the stairs to his third-floor room. He plucked his keycard from his pocket and entered. The faint scent of lemon polish and shifter combined with a foreign one—a hint of delicate flowers and a touch of spicy greenery. The maid had been in to turn down his bed and place a chocolate mint on his pillow. She’d forgotten to leave on the bedside lamp, which was a no-no where Erin was concerned. The hotel proprietress liked to get the small details right.

Leo shut the door, pausing a moment to let his eyes adjust to the pitch black. The faint rustle coming from the bed made him pause. He peered through the darkness and picked out the shape of a person. Leo cursed softly. He knew he didn’t have the wrong room. The maid was obviously going beyond the call of duty.

“Whoever you are, get out of my bed and leave. If you go now, I won’t report you to Erin.” Leo knew he sounded testy, but it had been that sort of day. He didn’t have the energy to dredge up smooth, urbane and charming.

“I’ll go if you want,” a husky voice said. “But don’t you want to see what you’re turning down first?”

The woman had the music of Europe in her voice. French or maybe Italian. Something continental and familiar.

“Turn on the light.” Leo held his breath, hardly daring to hope his senses weren’t deceiving him.

The crisp cotton sheets rustled when the woman moved. Leo’s heart pounded anxiously even though every one of his senses told him it was true. This was his mate, and she was waiting in his bed. His lungs expanded while he tried to exert control on his unruly body. Not a single thought of cold showers or icky situations worked on his eager cock. It felt as if every drop of blood in his body had sunk to his groin while he waited for illumination.

After a soft descriptive curse that raised a grin in Leo, the woman found the light. She flicked it on. Leo stared. The woman in his bed wasn’t wearing much more than a come-hither smile.

It was her—the mystery woman.

Leo didn’t move, not even to cover his painful erection. He stared at her, not knowing where to start or what to say. Finally he swallowed and cleared his throat. “What are you doing here?”

A delicate brow arched and a smile formed on her luscious pink lips. She tossed her head, her brown hair brushing the tops of her shoulders now that it was loose instead of piled on top of her head. “Isn’t it obvious?”

“No.” His gaze drifted across the creamy skin of her shoulders and the shadowed curves of her breasts before raising his eyes to scan her face. She wore a soft smile that showed straight white teeth. Her features were bold, softened by the smile and the gleam in eyes neither blue nor violet but a shade somewhere between.

“No? Should I be even more forward?” Her foreign accent—he decided it was Italian—sizzled along his nerve-endings in a seductive manner. Leo wanted to ask her questions so he could hear more. “I can do brazen with the best,” she murmured, and with that, she swept aside the white cotton sheet covering her body.

Leo’s breath caught. He couldn’t have looked away if he tried. The woman was all sleek muscles and curves with generous breasts. His hands started to itch with the need to touch. His befuddled mind took in the fact she was definitely not a blonde.

The color of the hair on her head was natural. Leo took one step closer to the king-size bed and stopped. “Why are you here?”

She tipped her head to the side and regarded him with a patient smile. “I’m a bit disappointed with your intelligence, but your looks make up for the lack.”

“There’s nothing wrong with my IQ,” Leo snapped. But it was true he wasn’t firing on all cylinders. A man had his pride, especially where a potential mate was concerned. He was damned if this would be a one-night thing, and he sure as hell wasn’t taking any man’s leavings.

“Am I going to have to do all the seduction here?”

Leo folded his arms across his chest and concentrated on her face. He didn’t trust himself to look at her breasts for an instant longer. “I want answers,” he said in a hard voice, “and if I don’t get them quickly, I’m calling security.”

“I’d like to see you try,” the woman retorted. “You’ll look stupid, no matter what you tell them.”

And he wasn’t particularly looking forward to Erin becoming involved. “Who are you? What’s your name? What are you doing in my room?” Leo fired the questions, desperately wanting answers before she wriggled past his control and he succumbed. He was only a hairsbreadth away from turning caveman and jumping her. Not a bad idea except damned if he would steal a woman off another man, or mate with a woman short on morals.

“My name is Isabella Black. I saw you looking at me in the casino.” She lowered her voice to a seductive purr. “I liked what I saw and decided to extend an invitation.”

“An invitation to what?”

“Time’s up. This was a one-time-only offer.” The woman stood unselfconsciously and turned away to retrieve her clothes from a chair where she’d left them neatly folded. Although she covered it well, Leo sensed her disappointment.

“Wait!” Leo blurted. Hell, nothing was turning out as he’d expected. He’d had visions of a romantic dinner and getting to know his mate gradually, of letting the awareness between them simmer, the heat gradually rising until it boiled over into passion.

“Wait for what? A cup of tea?” she mocked, glancing over her shoulder at him. She toyed with her clothes but didn’t start dressing. Her ass was world class, and she had a sexy little green dragon tattooed in the small of her back.

“I can make tea if you’d like,” Leo said, working at keeping his voice even. He’d love to inspect the dragon at closer quarters, drag his tongue across the green body, nibble a bit. Taste.

“But I don’t want tea,” she whispered, turning to face him. “I want sex. Hot, sweaty, no-holds-barred sex.” Her lips pursed and when she saw she’d caught his attention, her tongue darted out to moisten her lips. One sweep of her tongue and her lips glistened seductively.

The woman—Isabella—laughed, but the sound held not a shred of amusement. “You’re a disappointment, Leo Mitchell. I’d heard you’re a charming daredevil up for any challenge. Don’t you want me?” She sashayed across the carpeted floor, stopping mere inches from him, close enough so he felt the heat coming off her body. “Can I tempt you?” Her breath puffed across his lips, tickling and seductive. He caught a glimpse of her tongue poking between her lips and the vice around his chest tightened a notch.

Leo took a step back. He couldn’t think with her enticing body so close and her delicate scent teasing him, seducing him. Could she tempt him? Hell, yeah! But that didn’t mean he was going ahead. A man had to have some scruples. Leo Mitchell didn’t steal another man’s woman.

“A friend.” She didn’t pretend not to know what he was talking about and that scored a few points in his eyes.

“Do you play tonsil hockey with all your friends?”

Isabella shrugged, hard enough that he couldn’t fail to notice the jiggle of her breasts. “Mika has a warped sense of humor. It was a joke. We were lovers, but now we’re not. The only thing Mika and I have between us now is friendship and good memories.”

Leo wanted to believe her. His body was telling him to toss his scruples and accept the fact it was okay for women to be the aggressor in a relationship, but somewhere along the line, his mind had taken exception to the fact.

“What were you doing in Middlemarch? How did you know my name?”

“Where? The maids were talking about you. I overheard them. That’s how I knew your name.” Her reply was cool and held just the right amount of surprise, but Leo knew better. The woman held her secrets close. He could understand that. But he didn’t make mistakes. He’d smelled her scent. It bloody haunted him.

“How did you get in here?” Okay, he’d ignore the Middlemarch thing for the moment. She’d been there. He’d caught a fleeting glimpse and was convinced she was Sylvie’s mystery helper, even though the hair color was different. Leo would ferret out the truth later. “Do you have a key or did you bribe one of the maids to let you inside?”

Isabella grinned and reached out. She brushed her hand over his cheek for an instant before he jerked away. Damn, he’d felt her touch clear to his toes. Leo retreated a few more steps, uneasy with the way she seemed to be running this meeting. It was his room. She was the intruder, not him. Her grin widened and it pissed him off. He glowered but her smile didn’t dim.

“You know, anyone would think you were scared of me.”

And they wouldn’t be wrong, Leo thought wryly. She was his future. “I’m not frightened of you.”

“Then why are you running away?”

“I don’t know you,” Leo said finally. “You’re stark naked and you broke into my room.” She was distracting. He wanted to touch, to stroke her sleek muscles and explore her body with fingers and mouth. But he wanted to win her on his terms, dammit.

He wanted the thrill of the chase.