Mistakes are easy. It’s fixing them that can make or break a marriage.

Caroline Rutherford is at the end of her marriage tether. As much as she loves her husband, it’s time to admit defeat. Their long-term, love-at-first-sight relationship is no longer working, and they’re hurting each other and their two young sons by continuing the happy family farce.

Feline shifter Marsh Rutherford knows his relationship is in trouble, and he and Caroline, his human wife, haven’t shared a bed for months. He made a mistake at the start of their marriage, omitting to tell the truth, and now the secrets are strangling their happiness. Admitting the reality to himself is simple, but finding a solution to fix the problem is tearing him apart because reality has the potential to destroy what little trust remains between him and his wife.

Their future looks murky until a new opportunity presents itself—a fresh start for the entire family, a means for husband and wife to reconnect in and out of the bedroom. Caroline and Marsh agree to grasp the chance for a new future. Things are going well and their sex life has never been better, but those mysterious secrets hover in the background like pesky flies. Marsh must discover a way to make everything right because Caroline is his mate and the only woman who can make him happy. Losing her isn’t an option.

Warning: contains a sexy feline shapeshifter felled by a good woman. He’s confused and befuddled and makes mistakes, but it’s not too late, folks. We can fix this mess with love, with tears and a few humorous mishaps during the romantic journey. Fingers crossed…let’s go!

Caroline Rutherford reclined in her double bed and stared at the pages of her romance novel, despite the lateness of the hour. Instead of following the raven-haired Scottish lass as she led her hunky Highlander on an adventurous dance, her mind kept sliding to her own life. 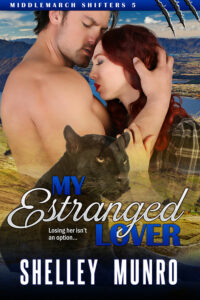 With another woman if her mother-in-law’s barbed hints held truth.

She hadn’t summoned the courage to ask Marsh.

Sighing, she shut the book and set it aside. Caroline rearranged her pillows and flicked off the light, plunging the bedroom into darkness.

With sight obscured, her other senses worked harder. The tick of the alarm clock sprang into focus, beating off the seconds, the minutes, the hours her husband stayed away from the house. The nights he slept in the spare bed. She sucked in a breath and caught a whiff of laundry powder, a trace of cinnamon from the candle she’d burned earlier, the spicy hint of her green tea perfume.
With a trace of embarrassment at her weakness, she reached beneath the pillow on the other side of the bed and pulled out a T-shirt—one of Marsh’s. She’d behaved like a stalker to get this, stealing her husband’s favorite T-shirt from the laundry hamper. Her throat tightened even as his comforting scent wrapped around her senses.

Tears stung her eyes as the truth loomed in her mind.

Their marriage couldn’t continue in this fashion, not if she wanted to retain her sanity.

A vehicle pulled up outside the house—one of the farmhouses reserved for workers. At least she’d won that argument and insisted they have their own home instead of moving into the large Rutherford homestead. Caroline’s stomach rolled, the knots twisting, turning, tightening until she wanted to scream in frustration.

But she remained silent.

She froze, tension in every muscle, in every slow, even breath.

Her hands curled to fists.

The old wooden floorboards creaked under the weight of footsteps.

Her fingernails dug into her palms.

Another door squeaked, softer with less of a protest.

The grip around her heart softened, emotion spilling a tear free.

Marsh was checking on Ricky. No matter how wide the gap yawned between them, she knew he loved their two boys, which made this situation even more difficult.

The door squeaked again. Footsteps neared their bedroom, stilled outside the ajar door.

Then the measured footsteps resumed, the creaks retreating as Marsh walked to the bedroom at the far end of the passage.

Maybe he was checking on James. Maybe he’d return.

Marsh didn’t make a return trip, choosing to sleep in the spare bed in James’s room instead of sleeping with her. A long-standing habit.

Tears slid down her cheeks, one after the other.

She couldn’t go on this way.

* * * * *
The early morning light struck his face, and Marsh groaned. Every muscle ached and his cheek—grazed by an exuberant tackle during the madcap rugby game the previous night and still tender—stuck to his pillow. Despite his feline genes and ability to heal fast, he felt like a flat tire. He peeled the cotton from his face and rolled over to see his oldest son staring at him from the twin single bed.

James crinkled his nose, his action reminding Marsh of Caroline. “You were making noises.”

“Yeah. Like this.” James wrinkled his button nose again and let out several loud snorts.

“I made those noises?” Snoring. He shouldn’t have stayed for two beers after the run with his friends. He’d known it, but he’d enjoyed being himself, embracing his feline form without worrying Caroline might discover his secret.

Marsh slid from the bed and stood, stretching with caution as he tested his limbs. Not too bad. He turned to his son and smiled. “Go back to sleep, huh?” Marsh stooped to tuck the covers around his son’s slight form. Although James took after him in appearance, Marsh saw so much of Caroline in his five-year-old son. Another topic of conflict with his parents.

Marsh drew back with a sigh and left the bedroom, pulling the door closed before heading to the kitchen. Coffee. Caffeine to clear his head and give him divine inspiration. He needed it.
His marriage was dying.

Damn it. He’d kept himself from marking Caroline and making her his mate and wife in truth.
Marsh made the coffee, doing the mundane actions by rote. A noise from behind had him whirling to face the doorway. Caroline stood there, looking as exhausted as he felt.

Strawberry-blonde hair lay in waves, long enough to reach her shoulders. Tall and always big-boned, two pregnancies had added to her curves and size. She was beautiful, and still did it for him, even though his mother derided Caroline for her lack of willpower with food. Her light blue eyes appeared wary and he forced a smile, forced himself not to drag her into his arms. Sex obscured the problem, made it worse.

“Please,” she said, her gaze scurrying over his bare chest, flitting to his boxer-briefs then darting to his face and settling on his grazed cheek.

Marsh willed his body not to react to her presence. Thought of cold showers and decided to flee and regroup. “Coffee won’t be long. I’ll grab clothes.” He strode from the kitchen and turned toward their bedroom—Caroline’s bedroom now. Somehow, they’d fallen into the routine of him sleeping elsewhere. Either on the couch or the spare bed in James’s bedroom.

He needed to grow a pair and fix this.

Marsh grabbed a pair of worn jeans from the wardrobe and pulled on a black T-shirt before returning to the kitchen. Caroline sat at the scarred kitchen table, a mug of coffee cupped in her hands. James’s green lunch box sat on the counter. Several colorful pots filled with herbs jostled for space on the window ledge.

Everything in the kitchen screamed old and well-worn. No dishwasher. No slick cabinets. No gadgets. Yet despite this, Caroline had made the kitchen, the entire house scream welcome. It was the haven and home he’d never had while growing up. His parents’ house, ten minutes down the road, seemed stiff and formal in comparison.

No, Caroline didn’t deserve this crap.

It was up to him to fix this wreck of a marriage because Caroline had tried. She’d tried so hard.

“Another great story in the Middlemarch Shifters series, this one brings a whole new perspective introduces new characters and new scenery for readers to enjoy and the cute and precocious child in this story added quite a few surprises and a few chuckles to my delight…I can’t wait for my next visit.”
~Stormy Vixen Book Reviews