Plan A sucks. Move over for plan B…

Sports commentator and reporter, Megan Saxon, has it all. The perfect career and freedom to do anything she wants, but as the years creep by she realizes love, or at least male companionship, has thumbed its nose at her. With the help of her agent-friend, she hatches Plan B. A brief love affair with a younger man will cure all ills and help her plan for the future.

The problem with plan B? Nothing, I repeat nothing, goes the way she plans, and she’s left gasping for breath, dodging reporters and suffering acute embarrassment.

The. Worst. Blushing. Epidemic. Ever.

Long-term widower and werewolf, Jacey Anderson, has moved to small country town Middlemarch to be near his grieving adult stepson, Henry, and to embrace the wide, open spaces with his wolf. He’s not expecting romance and especially with a public figure who attracts reporters like flies at a dung heap. His attraction to the sexy, sassy Megan has disaster written all over it, yet try telling that to his moonstruck wolf.

Yes, this Plan B has calamity written all over it for both parties. A pity that neither of them has a lick of good sense when they’re in the same room, touching… Kissing… Caressing…

Contains: werewolves, feline shifters, and creatures that howl at the night moon. There is also hot love, laughter and lots of teasing

“They’ve replaced me on the new show.” She glared at her computer screen and the familiar face of Janet, her United States agent. “They’re shunting me sideways.” 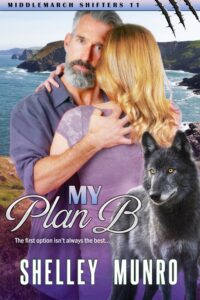 “They’ve done it,” Megan said, fury punching out her words in staccato beats.

“You should write full-time. Your sales are stellar, and the publisher will snap up more from you in a heartbeat. Start that new paranormal romance series you mentioned last year.”

“I don’t know. Writing is fun, something to fill the long plane flights and the nights in hotel rooms. If I go full-time, I’d worry about the writing becoming a drag. A chore. I love working with the sports team, traveling to commentate games and interview the players. I feel…I feel as though they’ve spare-tackled me—driven my head into the ground and left me unconscious, away in la-la land. The writing is fun, and the fact I’ve sold and made a decent living is a side benefit. It’s something just for me, you know?”

“So what are you going to do?”

Megan sighed, the expulsion of air leaving her lightheaded. She inhaled again while her mind sorted through her alternatives. Her shoulders slumped. “While I don’t agree with their ageism, hitting my forties limits my options. I guess I’ll do lists of pros and cons and work out what I do want. I have a job in the South Island for this weekend and then a weeklong holiday. Hopefully, I’ll come up with Plan B before I have to return to the office. I don’t think Jeremy knows what to do with me either.”

“You could always self-publish your new series and work at your own pace or take a penname and try something different.”

“What? You’d lose out on your fee.” Megan smiled at her agent of five years and the woman who had become a friend as well as her tough-negotiator and secret weapon.

Janet grinned back. “No, I wouldn’t, because my next suggestion is to use our in-house publishing. Win-win for me.”

“I’ll think about it. Add the idea to my lists.” Hadn’t she always yearned to write a historical romance? Maybe this was the opportunity to take this step.

“Have you considered writing an autobiography for someone else?”

“Yes. The agency gets requests from celebrities who can’t or won’t for whatever reason do their own writing.”

“You think I could do that?”

“I do. You’re used to interviewing sporting celebrities, asking the hard questions. You’ve won awards for it. Add the option to your mega lists.”

“Are you making fun of my lists?”

“Always,” Janet said, the twinkle in her brown eyes removing any sting.

Megan nodded. “Will do. I’d better pack for my trip to this one-horse town. Jeremy didn’t give me much notice, even though they received the invitation months ago. He must have intended to send one of the junior commentators, so on top of this, I’ll have another employee grousing about me and glaring holes in my back, full of resentment at losing a gig.”

“Not your fault,” Janet said. “You can’t control stuff like this.”

“True, but it doesn’t make me feel any better.”

“Don’t worry, sweetie. Look at this as an opportunity.”

“One more suggestion to add to your list,” Janet said, that twinkle appearing in her eyes again.

“Find a younger man and let him screw your brains out. That always perks me up.”

“Lord, I can’t remember when I last…oh, yeah.” She brightened then winced. “The last guy I dated was a doctor. He used to break dates because of work commitments. I thought I’d surprise him with dinner one night because he said he had work and needed to cancel our date. I found him screwing his wife. Since then, I’ve been wary. I have other bad dating stories I haven’t told you about yet.” No one even came close to comparing to Charlie.

“Oh, sweetie.” Janet shook her head. “Find a young stud. You’re attractive. You won’t have any difficulty in finding a man.”

“Can I quote you on that?” The job she loved impeded romance, and she’d chosen to focus on her work much to Tessa, her younger sister’s disgust. Looking back now, she saw her mistakes. Maybe Tessa with her snooty asides had been correct. “All right, I’ll add it to Plan B, but I’m not making any promises.”

“This gig at the one-horse town. Is it rugby related?”

Janet waggled her eyebrows. “Then, you have a pool of potential young studs.”

“I’m the commentator. I can’t sleep with one of the players.”

“I-I…” Her brain stopped working. She had nothing because it was a weekend tournament, and she wasn’t responsible for refereeing decisions. There was no conflict of interest if she decided to allow a player to pick her up. Of course, she didn’t want a coach bawling her out because she’d exhausted one of his players. Gossip, too, was another consideration. She’d never placed herself in a position where people discussed her morals and didn’t intend to start on this path to loss of her reputation. She drew herself up and nodded at the computer screen. “I’ll consider the idea.”

“That’s my girl. And on that note, I’ll leave you. Is your latest book coming along nicely? Do we need to shift any deadlines?”

“I sent the final edits into Carol last week, and I’ve started work on the last book in the trilogy. It’s going well. My deadline will be fine since I’ll get writing time in while I’m on holiday.”

“You’re not staying at home?”

“No, depending on the weather, I might zap across to Sydney or drive to Taupo.” Charlie, her fiancé, was buried in Taupo, and she hadn’t visited for a while.

“Good,” Janet said. “I expect a postcard. Go and do some work. Think about your next proposal while you’re away. I’m not kidding. Your publisher is keen to sign you for another series.”

“I’ll do that, Janet. Thanks.” Megan hit disconnect and stared at her screen for an instant. A picture of her and Charlie with a background of the Sydney harbor in Australia. They’d just become engaged, their young and innocent faces full of joy. Charlie had proposed to her before he left to join his army squad in Afghanistan. The roadside bomb had changed everything. She sighed and turned off her computer. She should change the picture, but every time she went to do that, something stopped her. They would’ve celebrated twenty years of marriage now, probably with children…

Megan pushed away from her desk, no longer in the mood to write. She wandered through her harborside apartment, pausing to stare out the window at the dark waters and the lights from the CBD, the harbor bridge and the businesses and homes on the North Shore of the city. She’d always loved her apartment and its central location. Tonight, it felt lonely. Sad.

She grabbed her red coat, a beanie to pull over her blonde hair and her black handbag. She’d go to the nearby hotel for a drink. No, maybe a cocktail. If she found someone to talk to—good. If not, she’d start on her lists. She’d pack once she arrived home. It wouldn’t matter if she was late because she’d never sleep tonight, anyway. A snort erupted. Not for the reason Janet might suspect. Anger and frustration still simmered every time she thought of the way they were shuffling her sideways.

Time for Plan B.

“You’re never too old to fall for a werewolf. I really like Megan, she’s loved and lost and moved on to a dream career. But just when you get comfortable change comes knocking on your door. A hunky older man may not be what she’s been looking for, but he could be what she needs. Loved this sweet sexy read!”
~ Amazon reviewer

“I didn’t think Ms. Munro could top some of her other books in this series, but she has! Her portrayal of mature romance and love is impeccable.”
~ Amazon reviewer

“It’s always great to read a story where the main characters aren’t just young & pretty. This couple have lived, loved & already had their hearts broken. They’ve made mistakes & now they have new choices to make. Loved this. Yes, it’s a ‘paranormal’ romance but at its core these are issues that lots of people face every day & in my opinion, that’s what made this story so great.”
~ Toni L