Man wanted: confident and charismatic, a virtuoso in bed and capable of supporting a woman in her quest for freedom.

Shifter Kiera Pascoe is desperate to foil her brothers’ plan to ship her back to England. She needs help, and hunky Joe Mitchell is the perfect applicant.

Joe is missing his twin Sly, who is in jail for a crime he didn’t commit. For Joe, Kiera presents a diversion. Her situation jolts him from his isolated state and the depression he has sunk in to without his twin. From the start, hunger explodes between them and sparks fly with each intoxicating touch. The sex is fun and challenging—mutual ecstasy with a little spanking and kink.

Kiera Pascoe swept into the Storm in a Teacup café, waved at Emily and Tomasine behind the counter and stomped over to Ambar Patel who was sitting at a table near a window. “I need a man,” she said as she yanked out a chair and plonked her overall-clad butt onto the wooden seat. Her eyes narrowed on her friend. “You have two. Give me one of yours.” 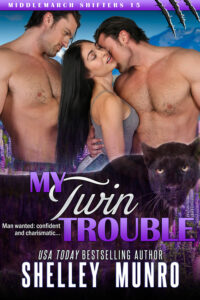 “No.” A grin surfaced in Ambar despite her instant rejection of the suggestion.

Kiera sniffed loudly. “Well, that’s plain selfish. Did you order yet? I only have half an hour. I promised Joe Mitchell I’d fix his tractor in time for him to mow his hay tomorrow morning.”

“I ordered for both of us. My men love me.” Ambar returned to the topic of men and the fact Kiera needed one. “We’re happy together.”

“Yeah. Yeah. It’s positively sickening.” Where was she going to find a man? Heck, maybe the better question was why had she settled in Middlemarch, a town known for its shortage of the male sex?

“Last I heard, you were too busy building your business to bother about a man. Just you and your trusty vibe, you said.”

“Yeah, well. That was before my three older brothers rang to tell me they’re coming out to New Zealand to attend polo school.”

“They’re bringing a friend with them.”

“Your brothers are matchmaking?” Ambar’s brows rose, highlighting her amusement. “I suppose they have hoity-toity accents like you and Hari?”

Kiera snorted because Ambar expected the response. A halfhearted reaction while her mind drifted to her brothers’ coming visit. They hadn’t admitted it, but her brothers—or Matthew, at least—intended to put pressure on her with emotional blackmail. A society marriage. Children. They were hoping she’d give up her weird fascination of tinkering with engines. So unfeminine. An agitated growl built deep in her throat, vibrating and wringing a chiding scowl from Ambar.

“Sorry.” Returning to England and a pointless society life was the last thing she wanted. She liked running the garage and working with motors and machinery. So what if her work played hell with her manicure? Running the garage gave her more satisfaction than attending exclusive London gatherings, and her career gave her a sense of closeness to her grandfather. The gruff old man, who’d discovered her crying one day when she was seven years old and taken her with him to a vintage car rally, had given her a very special gift—one of freedom.

Ambar made small-talk with Tomasine when she delivered their coffees and sandwiches. When Tomasine left, she frowned at Kiera. “What are you going to do?”

“I have three days to find a man. My brothers fly into Dunedin on Wednesday. They want to spend a few days with me before traveling up to Christchurch for the polo school.”

“Isn’t polo where they play croquet on horseback?”

Kiera chuckled, imagining her brothers’ reaction to Ambar’s description of their favorite sport. “Sort of.”

“I didn’t know they had polo schools.”

“They’re spending the entire summer improving their game,” Kiera said glumly. “I told them I work in an office.”

“Yeah,” Kiera said in a morose voice. “You’d better enjoy my company while you can. Once my three older brothers gang up on me, I won’t stand a chance.”

“Your brothers sound like tyrants.” Ambar paused to sip her latte.

They weren’t, not really. They loved her but were used to women fawning over them. Obeying their every command. If she’d stood up to them sooner instead of running away, she wouldn’t have to face them now at a disadvantage. Heck, she liked living in Middlemarch. She’d made friends here, started to carve out a life for herself. “My brothers are overprotective. They mean well.”

“You need to stand up to them.”

“Easy for you to say.” Kiera picked at her sandwich, her appetite nil. Finally she gave up. She set it back on the plate and drank her coffee instead. She’d get Emily to wrap the sandwich to go.

“Are your brothers married?”

“No. Actually, I’m surprised they’re taking a break from the law firm to come out here. They were close-mouthed about their reasons. I wasn’t exactly thinking clearly after they dropped their bombshell. I should have asked more questions.”

“If they give you a hard time, I can rally a few tiger and leopard shifters to knock sense into them.”

Kiera treated Ambar’s words as a joke, but her offer was genuine. She’d become a good friend. “I’d better go and sort out Joe’s tractor.”

Kiera wrinkled her nose. “He’s not interested in me.”

“He’s not interested in anything since Sly went to prison.” Ambar glanced over her shoulder and leaned closer. “Sly refuses to see him. We’re worried about them both.”

Kiera stood. Since Emily was busy, she grabbed a couple of paper napkins and wrapped her sandwich to take with her. “I’ll catch up with you tomorrow.”

With a wave, Kiera hurried from the café down the road to her garage.

Located opposite the post office, her garage consisted of fuel pumps to service both cars and trucks and a large workshop decked out for mechanical repairs. A small studio apartment rounded out the facilities. The garage wasn’t exactly the luxury she’d grown up with but it sufficed. Her brothers would turn up their collective feline noses.

“Where have you been?” Joe demanded, straightening from his lean against the wall.

Kiera lifted her sandwich. “Give me a break. I have to eat.”

The man had changed since their first meeting. He appeared thinner, his face gaunt while his beautiful green eyes lacked the teasing sparkle that first grabbed her attention. His black hair, shaggy and much longer now, grew past his collar. A wave of empathy swept her. According to Ambar, Sly shouldn’t be in jail. And she wasn’t the only Middlemarch resident who held the opinion.

A yawn cracked Joe’s jaw and he offered her a sheepish look. “Sorry.”

“No problem. You want half a sandwich?”

His eyes widened a fraction, as if her offer surprised him. The rumble of his stomach settled the matter. She unwrapped the sandwich and handed him half. She watched him surreptitiously, part of her surprised he’d even accepted the food.

“How long will my tractor take?”

“Without interruptions—say half an hour to an hour. Why don’t you take a pew while I finish the repairs?”

He didn’t move a muscle. “I’ll fall asleep if I sit down.”

Kiera shot him a quick glance before rewrapping her sandwich and setting it aside. “Maybe you should try to sleep. You can always stretch out on my bed.”

“Never heard that line before.” A quick grin twisted his lips, but his amusement faded before she became comfortable with the ease of tension in him. A spurt of pleasure filled her because she’d made him smile, and she immediately wanted to do it again.

“It was a genuine offer,” Kiera said. “You look as if you might keel over with exhaustion. I have a bed that’s not in use at present.”

“You’re not after my body. What a disappointment.”

Kiera sighed and reached for a wrench. “I do need a man.”

Another of those half grins flitted across his face, too rapid to light up his pretty eyes. “I’m surprised you’d have problems in that department.”

My Twin Trouble is a complex tale full of heartache, loving moments, and danger. Ms. Munro not only gives us a novel full of extreme heat, but this also happens to be a story that is so engrossing that you will not hear the phone ring. The complications between Kiera and Joe are intense and when Sly is added to the mix, it makes the storyline explode with an intensity that leaves you reeling. I love how the novel includes the many different feelings and elements that each of the major characters are feeling as it gives the reader the feeling of being right in the story. This is one outstanding novel that will have you wishing you could pack your bags and move to this enticing town yourself! ~ Coffee Time Romance and More

My Twin Trouble is no trouble to read at all. I found time zipping by at a quick pace because it was well written and entertaining not to mention blush inducing. I liked how Ms. Munro had them working out their differences. I enjoyed watching them fall in love. It wasn’t a fast event because they refused to label it love initially, but when they finally figured out they had the real thing and that dreams do come true, it was beautiful. Read it and see. ~ Whipped Cream Reviews

HOT! Make that Double Hot with whipped cream! The whole book is a well written emotional rollercoaster that will make your toes curl. The cover art made me choose to read the story. I didn’t realize My Twin Trouble was part of a series until the end, so it can definitely be a stand-alone book. ~ Nocture Reads