Shapeshifter Rory Mitchell and his family board the Mooltan for the long sea voyage to New Zealand. They’re unable to shift for the length of the journey, and Rory is shocked when a strange and delectable scent draws his feline to the surface, turning his control marginal. He has discovered his mate, but claiming her is impossible on a crowded and segregated ship.

Ainslie Finley’s parents died, leaving her alone. She accepts an offer from her uncle and aunt to travel to New Zealand. In exchange for them paying for her passage, she must act as their maid and on arrival in Dunedin, she will work for them for a further three months. She is drawn to Rory, but so are her cousins, and her aunt deems the Mitchell family unworthy. Then illness stalks the ship and every passenger is in danger of the blue death…
Circumstances conspire against Rory and Ainslie and their growing friendship in this prequel to the Middlemarch Shifters series.

Contains a determined shapeshifter and a woman with courage. This prequel also gives the reader a glimpse of a young Saber Mitchell, the hero in book one of the series. 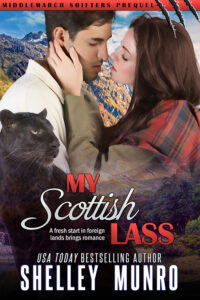 Saber Mitchell lounged on the floor of the den. His younger brothers Felix, Leo, Joe, and Sly sprawled around him on a Persian rug. Laura Mitchell, his mother, sat on her favorite rocking chair, an old book on her lap. Saber’s father, Rory, sat in his green recliner chair—the one that had the best view of his wife, he told his sons, and not because it sat squarely in front of the television.

He wrinkled his nose since his father was always saying things like that. It was…embarrassing. Although if he was honest, he preferred his happy parents to his friend’s. Ricky’s mother and father were always arguing, no matter who stood in the room with them.

“You should know where you come from,” his mother said.

“I come from Middlemarch,” Leo piped up, his face earnest.

Saber grinned while Felix sniggered. They were both older than Leo and knew more stuff.

His mother winked at his father. “You’re right, Leo. We do live in Middlemarch. Our family has been here for five generations, but before that our families resided in Scotland. Do you know where Scotland is?”

“On the other side of the world.” Felix squirmed until he found a more comfortable position. “We studied it at school.”

“That’s right.” Their father grinned at Saber. “Do you understand why they’re teaching you about Scotland?”

“Because soon it will be the anniversary of the day when our ancestors first landed at Dunedin,” Saber said. “The first settlers came on a ship called the John Wickliffe, and they arrived on twenty-third March in 1848.”

His mother hummed approval. “I’m glad to see you were listening, son.”

His father chuckled. “Son, learning and listening are excellent skills.”

“Our ancestors sailed to Dunedin from Greenock in Scotland. That’s near the city of Glasgow,” his mother said.

“They sailed on a ship called the Mooltan.”

Leo put up his hand.

“Felix,” their mother chided. “Do you have a question, Leo?”

Leo put his hand down. “Did they allow cats on the Mooltan?”

Their mother beamed with approval. “That is an excellent question. Our ancestors came out to join other family members. They had to hide their feline sides, just as we do now. I thought I’d read you the history of our ancestors. This is our family story about your great-great-grandfather Rory—your father’s namesake—and his wife Ainslie. They met onboard the Mooltan.”

Joe and Sly, the twins, whispered together.

“They must’ve been old,” Joe said.

“They were young. Not as young as you, but older than Saber. I think Rory was eighteen and Ainslie seventeen.”

“Won’t they tell us at school?” Leo asked.

“No,” their father replied. “Because our story features shapeshifters. We felines have secrets from humans.”

“How long were they on the ship?” Curiosity piqued Saber. He’d shifted for the first time at age thirteen. Each week, he, his father, cousins, and uncles ran through the backcountry. Even though he’d recently shifted, he couldn’t imagine being confined to a ship and not transforming for the length of the voyage.

“Many Scottish people—Irish too—caught ships to America and made new lives. The journey to New Zealand took much longer, around four months, and it was more expensive than traveling to America,” their mother said. “Your great-grandmother wrote Rory’s and Ainslie’s story so we could pass it down through our family. You’re old enough to hear the tale. It’s an important part of our history.”

Leo lay on his stomach while the twins yawned one after the other, their eyes drooping.

Reviews for My Scarlet Woman, the next book in the series:

“MY SCARLET WOMAN by Shelley Munro will have you grrrrrrowling and purring in the most delicious way with her book…. Ms. Munro writes the most titillating and exotic books…. My recommendation for this book is to have these things on stand-by: ice water, cold shower, bed or a man, and these are just for starters, but not necessarily in that order.”
~ 5 Ribbons, Romance Junkies

“Superbly written, this tale had me hooked. Are you a paranormal fan? Specifically, a feline shape shifter fan? Then this is most definitely one for you!” ~ Novelspot