The residents of Middlemarch have a nickname for reporter Tomasine Brooks. They call her Peeping Tom and refuse to answer her questions about the mysterious black cats spotted in the vicinity. To them she’s an outsider—the enemy—who has no place in their close-knit shifter community.

Tomasine is determined to find a safe place to settle but earning the locals’ trust seems impossible. In desperation, she decides to seduce the sexy Felix Mitchell into giving away Middlemarch’s secrets because it’s a matter of life or death…hers.

From the moment feline shifter Felix Mitchell crashes into Tomasine outside the post office he desires her with an urgency that makes him suspect they are fated mates. When they are together the connection is hot, the sex is spicy and she makes him happy, but Tomasine is close-mouthed about her past—a past that can threaten their future together.

Felix didn’t feel like going to the dance at the historic woolshed but knew Saber and Emily needed privacy for a change. And in truth, he didn’t think he could take another night of listening to them. Man, he needed to get laid. Maybe that would shift the sense of uneasiness that had assailed him lately. Loneliness. Yeah, that was it. After seeing Saber and Emily together, he craved the same happiness they’d found. 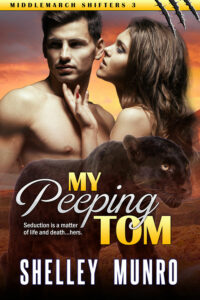 “Leo, you going to the woolshed dance?” Felix asked when his brother came into the kitchen.

“Nah.” Leo grabbed a black leather wallet off the countertop and slid it into the back pocket of his jeans. “I’m going to Queenstown for the weekend. Why don’t you come too?”

Felix fought the need to say yes and finally good conscience won. He stood with an internal sigh. “Thanks but it’s my turn to hang around and keep an eye on the farm this weekend. I know Saber would do it if I asked but he deserves some time with Emily.” He strolled past Leo and yanked open the fridge to pull out a beer. Returning to the seat he’d vacated, he sat, placing the can on the table in front of him.

“That’s part of the reason I’m going. Since Saber mated, I feel damned edgy all the time. It’s almost as if my mate is out there waiting for me. I felt it-a sort of awareness-when I was in Queenstown a few weeks ago so I’m going back to search. And if you repeat one word of this conversation to anyone, I’m going to flatten you.”

Any other time Felix would have grinned and teased his brother unmercifully but Leo’s words tugged a cord in him. Restless. Uneasy. Prickling skin and the urge for sex. It hammered through him relentlessly, nagging like a sore tooth. Felix tipped back his head and drank. The beer slid down his throat, the taste of crisp hops filling his mouth. He swallowed and wiped the back of his hand over his mouth. “I hope you find your mate.”

Leo frowned and pulled out the chair opposite Felix. He dropped onto it and peered at his brother with concern. “You too, huh?”

Felix thought about lying but he didn’t have it in him tonight. His life was a friggin’ mess. Maybe Leo could help him make sense of the chaos. “Tomasine Brooks.”

A bark of laughter erupted from Leo. “Peeping Tom, the reporter?” He studied his brother and gradually the humor dropped from his face. “Hell.”

“What are you going to do?”

Felix scowled even as his body sent a surge of longing thrumming to every part that would listen. He stirred, silently cursing his rising cock. He foresaw another cold shower in his future. All he had to do was think of the woman and his cock rose like a bloody warning beacon. It hadn’t been like that the first time he saw her or the second. This feeling had crept up on him and sprang out unexpectedly. Last week. He’d been in agony ever since. “I’ve been avoiding her. It’s not difficult since you can smell her coming from a block away.”

“Yep, that godawful perfume she wears is better than a signal fire. Most of the shifters in town dodge her whenever they can to avoid her questions.”

“Yeah, that’s another reason I’m dodging her. I’m sick of her questions about the black panther sightings. You’d think she’d give up because she’s not getting any information from the locals. Not since the newspaper article she wrote about the black panther sightings near Middlemarch.” Felix’s gut churned at the thought of the petite dark-haired reporter. “Besides, she has career woman written all over her. I’m not going that route again.”

“You sure, bro? She has a kid and a cousin who lives with her, so she can’t be that involved with her career.”

Felix cursed softly and drank another slug of beer while he thought about his life and the way it sucked. “Tomasine Brooks is determined to get her story. She reminds me of Alicia-the same grit and killer instinct. She might be a tiny thing but I’m not going to let her walk all over me like Alicia did. I’m not a green kid anymore.”

“You can’t fight the urge, not if the woman is really your mate. Shit, if you’re feeling half the grief I am.” Leo trailed off with an expressive shrug. “Maybe you should try a one-night stand. Perhaps it’s not her.”

“It’s her all right.” And he wished like hell it wasn’t.

“But how do you know?” Leo insisted.

Felix thumped his beer can onto the tabletop and leaned back on his wooden chair. He squeezed his eyes closed and remembered the moment his week had slid into the toilet. At the post office. He’d gone to pick up some stamps so he could post a couple of farm invoices and he’d bumped into her. Literally. A full shoulder to knee body contact. Felix shuddered remembering the heat that had surged straight to his cock. He’d smelled something foreign before the stench of her perfume had hit him and his eyes had started to water. The need to kiss her, to rip off her clothes and take her there in the street had almost killed him. “I almost fucked her outside the post office. That conclusive enough for you?”

Leo gaped for an instant. His dark brows rose. “Yeah. Okay. You might be right. Hell, outside the post office?”

“Scared the shit out of me. School had just let out.”

“I apologized for bumping into her and hightailed it out of there. Emily bawled me out for forgetting the stamps when I arrived home. I headed straight for the shower and- Well, that’s probably enough information. The rest is personal.”

“What are you going to do?”

Before Felix could answer, the distinct sound of feminine laughter came from the far end of the house. A husky male chuckle followed.

“It’s times like this that I wish our senses weren’t so highly developed,” Felix muttered. “The way I see it, I can either stay here and think about sex because I know Saber is getting some or I can head to the dance and think of sex there. Either way I’m screwed.”

“Nah, that’s your problem,” Leo said. “You want to be screwed.” He jumped to his feet and danced out of Felix’s reach. “You want sex. You want to do it, not think about it.”

“Thank you, oh wise one,” Felix snapped. “That’s very helpful. Tell me what I should do.”

Leo sobered. “Hell if I know.”

There was silence as they pondered their collective problems. The bed started to creak down at the far end of the house.

“I’m out of here.” Leo snagged a set of keys from the set of hooks just inside the kitchen door. He paused and turned around. “Maybe you should let things take their course. Go to the woolshed dance and if she’s agreeable, take things from there.”

Felix spewed a mouthful of beer over the flowery tablecloth, one of the many changes instigated by Emily. He leapt to his feet, grabbed a cloth from near the sink and dabbed at the marks. “You’re telling me to sleep with the enemy. Man, where’s your brain?”

“Same place yours is,” Leo snapped. “Fuck her, dammit, and get her out of your system.” He stomped from sight, leaving Felix staring after him in shock.

Leo had it as bad as he did.

“MY PEEPING TOM by Shelley Munro is a hot, fun continuation of MY SCARLET WOMAN. The heat between Felix and Thomasine scorched my fingers. And I loved Ms. Munro’s descriptions of shifting and the closeness between not only the Mitchell brothers but the residents of Middlemarch.”
~ Joyfully Reviewed