Wrap the gift in love…

When Isabella found her forever mate in shifter Leo Mitchell, she shoved aside memories of her feckless parents and her past. Her inability to have children was more challenging, but she stashed those emotions, too. That’s until someone leaves a kid in a basket, right on their doorstep…

Leo adores his strong, bad-ass woman, and when the mystery behind their Christmas keepsake creates danger for the small town of Middlemarch, he isn’t about to fail his mate. Together, they’ll fight this hidden threat while adjusting to life with an active child. The boy might bring them even closer—if they survive the experience.

Reader advisory: this stand-alone series romance features oodles of shapeshifters, seasonal festivities and rituals, family life in a small rural town, an adorable kitten keen on Christmas tree baubles, and a puppy. Oh, and sweet, steamy loving between mates. What’s not to like?

Since childhood, Isabella Mitchell had survived by her instincts. Now happily married to Leo, those days were far behind her, but her sixth sense remained. Right now, intuition screamed at her to check her incoming messages—the ones relating to her assassin-for-hire past. 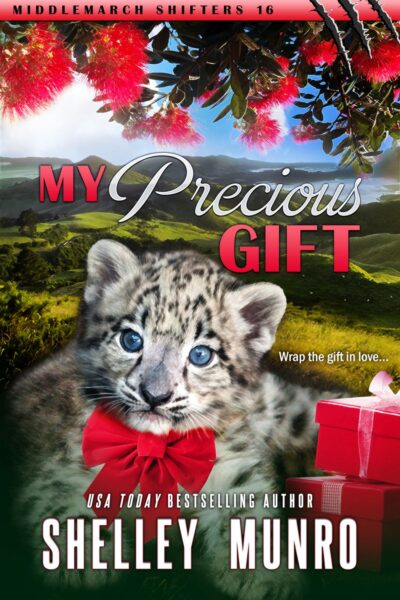 She sat up in bed, issuing a hard sigh of displeasure.

“I need to visit the lockup.” Shorthand code for the place where she stored her old life’s remnants. Leo understood and accepted the past might leap from the shadows. Not that his tolerance made the truth more straightforward. Isabella hated that she might attract trouble for her beloved mate, his brothers, and their friends.

Leo shot upright, his features marred by a slight frown. The cream covers puddled to his lap, baring his muscular chest. “What’s the problem?”

It was her turn to scowl. “I don’t know. My gut is telling me to check my messages.”

Leo gave a decisive nod. “Right. I’ll make coffee while you shower.” He climbed from the bed, unconcerned with his nudity in the way of most shifters.

Isabella’s unease cleared as she admired his packed muscle and his fluid strides across the thick heather-gray carpet. Her husband was a black leopard shifter, and it showed in his prowling gait and alertness, his ability to act with decisiveness. “We have time for toast,” she called as he disappeared.

“You make the toast while I shower,” he shot back.

Their fourth anniversary wasn’t far away, and she loved Leo more with each passing day. Thanks to Leo, his siblings, and their wives, she’d found a secure home, a family, and she’d never been happier. The only blight was her inability to have children since chameleon shifters only conceived with their kind. She’d told Leo she was a chameleon shifter once they’d started falling in love and confessed she’d never bear a child with him. He’d assured her this wasn’t important.

It’d been her he’d wanted.

Isabella padded into the en suite, the cream tiles cool beneath her bare feet. She gathered her long blonde hair into a knot and stepped under the warm water an instant after she turned the mixer tap in the walk-in shower. Soon, an orange scent wafted around her, and the heat of the water eased the tension in her shoulders.

By the time she entered the kitchen, dressed and more alert, the aroma of coffee filled the air, and a jaunty Christmas carol poured from the Bluetooth speaker, the volume on low. She accepted the mug Leo handed her and plopped onto a barstool at the breakfast bar to take the first sip.

For an instant, she gave silent thanks, as she always did. From the moment she, Tomasine, and Sylvie had arrived in Middlemarch, their lives had changed. Instead of weapons, fighting, and dangerous adventure, Isabella—in her teen guise—had gone to school, made friends, and learned ordinary things. Domestic things. Activities such as sewing and knitting and cooking. Once she’d taken her true Isabella form and become Leo’s mate, she’d thrown herself into community events and used her self-defense and fitness skills to teach others. Her organizational abilities had aided her new friends. She’d helped herself.

Isabella surveyed the white-speckled countertops and the silver-and-bronze toaster and kettle, the gleaming glass cooktop, the stainless steel fridge, the sleek blinds at the kitchen windows and smiled with satisfaction. Contentment. Right now, bursts of tasteful decorations in red, green, and white and a miniature Christmas tree on the counter added to the festive spirit.

The shower turned off in the bedroom, jolting Isabella from her thoughts. Toast. Right. The marriage thing. Isabella retrieved the loaf of three-grain bread from the fridge, the butter, the jam, and Leo’s favorite—vegemite—and set them out. Hurriedly, she popped four slices of bread into the toaster and sat to drink more of her coffee.
The truth.
Her past bothered her, specifically when it intruded on her present. She’d willingly turned her back on her profession and embraced a safer life with family and friends.

Now that she cared for Leo, enemies emerging from the muck possessed a lever to destroy her. Leo was her world. She’d never realized she could feel this deeply about another person. Marriage to Leo had completed her, strengthened her, but made her vulnerable too.

The toast popped up seconds after Leo entered the kitchen. Isabella started to rise, but he stilled her by placing his hands on her hips.

“I’ll get the toast while you tell me what’s on your mind and why I’m seeing that furrow between your pretty violet eyes.” He smoothed aside her hair and kissed the tender skin of her neck before stalking to the toaster.

Leo placed a plate in front of her. “Isabella, you’re usually right. Your instincts are always spot on.”

“I’m worried you or one of your brothers or sisters-in-law will get hurt, and it will be my fault,” Isabella blurted.

Leo took the barstool beside her and reached for the soft butter and the jar of vegemite. “Isabella, none of us would even think that let alone accuse you of carelessness with security. We’re a community of black leopard shifters with a few lions, tigers, and wolves sprinkled into the mix. Danger is a common thread in our town, but we have excellent systems in place for every contingency.”

“But it’s almost Christmas. It’s my favorite time of the year. I don’t want it spoiled with trouble.” She risked a glance at her husband. “Stop laughing at me.”

Leo crunched on a triangle of toast and sipped his coffee. “Let’s finish our snack and head to your lockup. We’ll face this trouble head-on and kick it in the butt.”