Laura Adams is a cop with ambition, and a job in Middlemarch isn’t what she wants for her future. Hooking up with the wrong man is responsible for the wrong turning, and she refuses to repeat the mistake, especially with a sexy thief.

Leopard shifter Jonno Campbell takes one look at Laura and desires her as his mate. He’s enthralled with the fiery cop, and when she arrests him, he’s ready for a strip search. Convincing Laura he’s innocent and that they should work together to capture the thieves stealing from Middlemarch residents isn’t easy. A kiss laced with his easy charm does the trick and sparks fly. Passion escalates into primitive hunger. A night of hot loving convinces Jonno. He wants forever with the gorgeous Laura, but her ambition, his feline heritage and a gang of thieves stand in the way of his progress. Then there’s the ex-boyfriend who wants Laura back. This time charisma and erotic promises mightn’t be enough to win the lady.

“Hold it right there. You’re under arrest.” 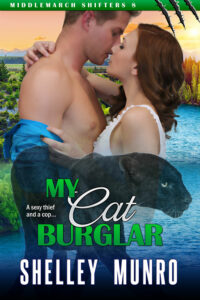 The man froze in the bright stream of moonlight, his muscular bulk rigid like a marble statue. Laura Adams scanned him anxiously, alert for the slightest sign of trouble. A head taller than her with tawny hair, he appeared more than capable of causing a disruption. She’d spied him when he’d prowled past the wooden display case in the Miller’s formal lounge, each studied move laced with leashed power and grace. She was pretty sure she hadn’t seen him during her two weeks of working at the Middlemarch police station. Him she’d remember. Her gaze skimmed his broad T-shirt-clad back and drifted over his tight ass, lovingly showcased in black jeans that fit like a second skin. What she wouldn’t give to strip away the cloth and stroke the firm, rounded globes of his butt. She’d bet his cock—

Her breath hissed out in horror and her head jerked in a sharp shake of denial. What the hell? Since when did she start fantasizing about ripping clothes off men in the middle of a bust? A criminal, caught red-handed, dammit!

“Put your hands in the air where I can see them.” Thankfully her voice emerged on a steady note, hiding every sign of her disorientating sexual awareness. Laura grabbed the handcuffs off her belt and stalked closer, her boots a whisper on the thick carpet.

“Are you gonna cuff me?” the man drawled, his rough intonation raising a series of goose bumps across her arms and legs. Not a shred of concern tinged his voice.

How had he known she’d shifted position? She’d hadn’t made a sound. Perplexed, she dragged in a deep breath, cursing inwardly seconds later. Since when had criminals obtained all these sneaky secret weapons? The man had a form she’d love to explore and he smelled good. Crime number two.
Laura stretched, standing on tiptoes to cuff one thick wrist. He was a tall sucker, topping her by six inches and she wasn’t a shrimp. She jerked his arm down behind his back and reached for the other, trying to ignore his seductive scent of something vaguely Oriental. It sure made a change from vomit-scented Friday-night drunks.

“There’s a bed in the other room,” he said. “Just sayin’ cause that would be a lot more fun. For both of us.” His smoky voice throbbed with innuendo and an underlying teasing. Immediately her body softened in reaction, her thoughts drifting and agreeing horizontal would work well, especially with this man. “So what about it? You. Me. A flat surface.”

Laura gasped, a swarm of heat engulfing her face at both the man’s words and her unruly, totally inappropriate thoughts. Charlie, her partner, snickered behind her and the mortification intensified, her heartbeat thundering in her ears. “Have you checked the rest of the house?”

“Yeah,” Charlie said, his mien shifting to professional. “All clear. No one else here.”

“Good.” Charlie was okay, or he would be once he understood there were boundaries in their partnership and they didn’t include anything remotely sexual. He probably resented the fact she had seniority and as such took charge.

“The bed?” her prisoner reminded her in his sexy voice.

Laura barely suppressed her shudder of awareness. Hot damn, this was ridiculous. She took care with her reputation—well, apart from one major snafu. Jumping men on the first date didn’t happen very often. And fantasizing about doing it with a prisoner didn’t happen at all. Never! Normally, she preferred to get to know a man before thoughts of sex clouded issues and made a relationship complicated. Like every other woman her age, she experienced sexual needs—a normal and healthy thing. And despite swearing off sex only two months ago, she obviously needed to score on her next day off. Maybe she could hook up with one of her old boyfriends back in Dunedin. That might work and help to soothe away her edginess.

“There’s a bed for you in the holding cell,” she snapped. “What are you doing in the Miller’s house?”

“A holding cell, huh? That could be kinky. Yeah, we could make that work. I like it.”

Laura ignored the husky remarks with difficulty, just as she disregarded the urge to run her hands through his thick tawny hair and over those wide shoulders displayed to perfection by the tight black T-shirt. What did he want? Why was he in the Miller house? And was he responsible for the string of recent jewelry thefts throughout the surrounding district? They’d caught him trespassing. It was enough to take him in. He certainly looked the part, dressed entirely in black. Damn, she’d have to search him. Her hands tingled at the thought, images taking wing before she jammed on the brakes with a soft curse. Charlie could do the search. She scowled and shoved away the jealousy springing into her mind to concentrate on practical thoughts. If he’d stolen the jewelry, why had they captured him so easily? Laura knew she did a good job, but in her experience, thieves didn’t make solving the crimes this simple. It didn’t make sense. “What’s your name?”

“Jonathan Campbell,” he said without hesitation. His voice lowered to intimate. “You can call me Jonno.”

It wasn’t the name that popped into Laura’s head first. “Lover” beat Jonathan and Jonno by a wide mile. She shook herself and urged her prisoner from the room, alert for trouble. Her heart pounded faster than normal and Laura cursed again. Maybe the application of chocolate…ah…the eating of chocolate would help soothe her peculiar mood and the plain weird sexual urges. Yeah, maybe a good, old chocolate splurge would hold her until the weekend when she could really let loose and get laid in multiple positions and places. She mentally paged through her PDA, considering her past boyfriends and current male friends while she narrowed the field of fuck buddies. Hell, listen to her. Concentrate, Laura. Her gaze swept across the man’s shoulders again, drifted over his butt, and her friends-with-benefits plan flew right out the door. Damn and blast.

“Move it.” Laura gave him a shove in the middle of the back to get him moving. A charge of electricity shot from her fingertips and up her arm. She jerked it away in astonishment, squeezing her hand into a fist and shaking it.

“Where are we going?” Jonno asked.

“The police station.” Laura started to read him his rights, rattling off the requisite words while she directed him from the luxurious and formal lounge of the Miller property into the passage and toward the front door. Damn, she didn’t like this one bit. Jonno Campbell prowled rather than walked, leashed power emanating from him. If he decided to attempt an escape, she suspected the cuffs wouldn’t hinder him much. To her relief, he didn’t offer any resistance, playing the model prisoner.

Laura let out a thankful sigh when the rear door of the police car finally closed, trapping Jonno Campbell inside. Unfortunately, she could still see him, and the front view looked even better than the rear. Everything about the man appeared big, yet he moved gracefully without a hint of clumsiness. His hazel eyes twinkled—bright, wide and full of mischief whenever they lit on her. The impish quality echoed in his generous mouth while his nose appeared a trifle on the big side yet fit with the rest of his body. His was an attractive face, and Laura would bet he knew it and never had a shortage of girlfriends.

“Fuck,” she whispered, knowing she’d landed in a mess of trouble. One thing was certain. Her dreams would be X-rated tonight.

Charlie walked around to the driver’s side and climbed inside the vehicle. Sighing, Laura opened the passenger door and sat primly on the edge of the seat. The man watched her. She could literally feel his scrutiny on her back. To her consternation, her breasts prickled, arousal letting out signals in the form of tight nipples. Laura resisted the urge to cross her arms to conceal the evidence. Just.

The engine of the vehicle hummed to life, seeming to echo through her sensitized body. Only a short trip to the police station. She’d book him, finish her shift and head back to the house she shared with Charlie as part of her wage package. She’d forget Mr. Sexy. Forget him.

“Remember your seat belt, sweetheart,” came a husky reminder from the rear. “I wouldn’t want that pretty face all scraped.”

“Has anyone told you that you curse too much?” the prisoner asked, amusement tingeing his voice this time. “Didn’t anyone ever wash that sexy mouth out with soap?”

“Nah, they gave her prunes instead,” Charlie quipped with a sideward glance.

“Drive,” Laura snarled at Charlie. Men. She fumed all the way back to the police station.

“This book is another wonderful addition to a unique series of exciting stories on shifters that I definitely recommend reading.”
~ The Romance Studio.

“I thoroughly enjoyed Shelley Munro’s My Cat Burglar and highly recommend the Middlemach Shifters series as a must read!”
~ Bitten By Books.

“The only way it could be better is if I could move to Middlemarch myself and be there all the time.” Reviewer Top Pick.
~ Night Owl Romances.

“My Cat Burglar is a story about love being found in the most unexpected moment….it definitely does not disappoint…”
~ Two Lips Reviews.