Go Behind The Scenes

Saber and Emily Mitchell have been mates for years and happy until the tragic loss of their baby changes everything.

Feline shapeshifter, Saber is having a tough week with family and community problems. Worse, his beloved Emily has shut him out and is wallowing in depression. They inhabit the same house, but his loving mate has withdrawn. It’s time to up the ante because the growing rift is driving him to despair. Armed with a bag of sex toys and a tropical island setting, Saber is determined to seduce his mate to his way of thinking, to drive the blues away, and he won’t take no for an answer.

Saber Mitchell prowled across the tussock in feline form, gradually picking up speed until he was galloping at full strength. His mind seethed with turmoil. Anger. Helplessness. Pain. He felt it all. 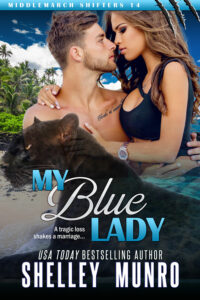 The emotions roiled inside him, combining into doubt and panic. Something had to change between him and Emily before it was too late and their marriage imploded under the strain. His muscles strained. His lungs labored as he fought the stiff breeze roaring over the brow of the hill. Running didn’t help. No matter how fast his sprint, he couldn’t outrun his fears.

He was losing Emily.

Anguish swelled inside him and he slowed, realizing he’d instinctively headed for the spot where he and Emily had made love during the heady days of their courtship. He’d known what he’d wanted then. Confidence had filled him as he’d pursued his goals. He’d wanted Emily and done his best to both seduce and woo her to his way of thinking. Officially bestowing his mark on Emily and mating with her was the best thing he’d ever done.

It might seem laughable to some, but Emily really did complete him. Her presence made him a better man. She pulled him and his brothers together, making them into a big, happy family, one full of love and laughter.
Hell, he didn’t know what to do, how to make things better or how to fix the yawning hole between them. Because there was one thing he knew for sure—he couldn’t survive without Emily. They were mates, meant to live out their lives together.

Saber came to a halt in the shelter of a large pile of schist, his sides heaving from the exertion. The scent of dried grasses and the underlying, more pungent aroma of the soil, damp from recent rain and cattle filled his lungs. He’d come out here to think, but his mind couldn’t get past the fact he was losing Emily and the reality—he’d never felt so helpless in his entire life.

It didn’t help that he hadn’t been there for her and their unborn daughter when they needed him. That’s what killed him most of all. He’d promised to look after Emily and hadn’t. He’d failed her.

The ache of failure intensified, hurting his chest. Despondently, he padded back into the wind, heading for his vehicle. This time self-sufficiency wasn’t going to work. He needed help.

Half an hour later, he walked into Gavin Finley’s surgery, halting just inside the door. Gavin was both doctor to the local feline shifters and vet for the human part of the Middlemarch community. Kiran, Gavin’s assistant, was with him as they worked on a golden retriever.

“Gavin, I need to make an appointment,” Saber said. “Can you fit me in?”

“Is there a problem?” Gavin watched Kiran carefully stitch the wound closed.

“No. Yes.” His hands curled to fists at his sides while he struggled to ask for help. He was the one who fixed problems. He didn’t need help. His shoulders slumped forward a fraction.

That was a lie.

He and Emily desperately required help. Saber glanced at Kiran. He’d tried to feel anger at the young tiger shifter because it was his presence that had placed Emily directly in the path of danger. Logically, he knew Kiran was just as innocent as Emily and their unborn baby. The men who had stormed their house, searching for Kiran, were to blame, and his initial anger had dulled. “I need to speak with you in private—when you have a moment.”

“Kiran and I have another appointment.” He glanced at the wall clock. “We should be done by three. Do you want to meet at Storm in a Teacup for a coffee?”

“No,” he barked. That was the last thing he wanted. Emily was actually working there today, which was a change from the lethargy and melancholy of the past months. He didn’t want Emily to know he was seeing Gavin. “I…could we meet here?”

“Better make it half past three so I have a chance to get something to eat. My stomach is gnawing my backbone.”

“I’ll bring food and coffee,” Saber said. Emily would give him food. They might not talk, they might not socialize with family and friends in the same way they used to, but they did eat, or pretend to, in the case of his mate.

“I need to talk to you about Emily.” Despite the feeling of disloyalty, Saber would do anything to make things right. They’d never be exactly the same as they were before. Saber knew and accepted that. But he refused to believe the empty bubble they’d inhabited for the last eight months was all they had in the future. He forced himself to talk, to stumble through and lay out his—their—personal problems in the hope Gavin could help. “She’s not getting better. We don’t talk anymore. We sleep in the same bed, but that’s all. Emily doesn’t—won’t touch me.” A lump built in Saber’s throat, the sting of tears coming on him suddenly. “She locks herself in the bathroom and cries. She thinks I don’t know. It’s like she’s retreated to her own world where nothing else exists. I…I don’t know how to fix things.” Saber squeezed his eyes shut, concentrating fiercely on maintaining his equilibrium when all he wanted to do was howl with the pain.

“You have to give it time.” Gavin reached for his hand, making Saber flinch. Instinctively, he tried to pull away, but Gavin held fast, refusing to let him withdraw. “The loss of a baby due to miscarriage is exactly like mourning the loss of a loved one. You both bonded with your baby and pictured what she’d look like. You considered names and set up a nursery. God, Saber. Something like this doesn’t go away overnight. Emily needs to grieve and go through all the stages, the initial grief, the anger, the depression and acceptance before she can come out the other side. You both do.”

“But how much time?” Saber inhaled and blew out the breath slowly in an effort to release the tension residing in every muscle of his body. He’d known this would be difficult. Just talking about their baby girl felt like someone had taken a knife to his gut. “I…we can’t keep on like this without our marriage breaking. I can’t lose Emily. I can’t,” Saber finished fiercely. They’d lost enough already.

“The characters will touch your heart and anyone with children will sympathize with this couple. Emotions flare, and the heat comes alive as he brings her back from the pain and teaches her to open her heart again. I enjoyed this read and empathized with the characters. Sorrow can be beautiful if we learn from the heartache. Munro is a master at teaching the lesson.” ~ Happy Ever After Reviews

“The story is beautiful, passionate, well written and a delight to read. If a reader is looking for a sweet and hot romance, they’ll find it here.” ~ Whipped Cream Reviews

“It was a good story and I was glad to see them work things out. Because it was so short I had a harder time connecting with the characters. If I had read the other stories I think I would grade this higher because I would have been more vested in the characters, but as a stand alone story I give this a 3.5 out of 5.” ~ The Book Binge