Lion shifter Leticia Huntingdon has FIV, the feline version of AIDS. For months she’s been in remission, treated by Gavin Finley, the Middlemarch feline doctor. Now the disease has returned. Her feelings for Gavin can’t go anywhere because of the FIV, so it shouldn’t hurt when Gavin turns to Charlie, the new male cop.

Gavin can’t believe how good sex is with Charlie, can’t believe he’s found a mate. The loving is amazing and hot, but Gavin can’t forget Leticia. He wants her in his life. He wants Charlie too. Confusion and jealousy create torrid undercurrents for the trio.

Charlie McKenzie falls for Gavin quickly and can’t understand why he’s attracted to Leticia. A nightmare changes everything, drawing the three together and bringing new possibilities. A ménage a trois. Raw need and passion brings them closer. If only the disease threatening Leticia’s life didn’t loom on the horizon…

Charlie McKenzie stepped outside onto the tiled courtyard in Emily and Saber Mitchell’s garden, joining the partygoers who had spilled into the night air. He spotted Gavin Finley over on his left, his heart lurching and his feet heading in that direction almost before he’d decided to give in to his curiosity and the weird attraction he sported for the feline doctor. 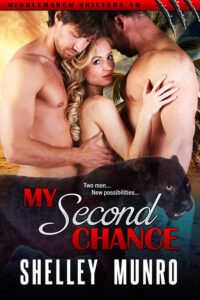 Embarrassing really. From the moment he’d spotted Gavin a few weeks ago he’d thought of him sexually, the yearning spilling over into frankly explicit dreams that had him waking in a sweat and with a dick hard enough to cause damage. Charlie had initially fought his attraction to Gavin—to no avail. Something compelled him to seek out the shifter male, and since Gavin seemed to welcome his company, Charlie had given up his fight. He liked Gavin, and the physical attraction didn’t repulse him since he’d experimented in his late teens. Recently, fate had led him to date only women, and in small country town Middlemarch he’d expected to continue in the same way. Maybe not.

The shifter community had welcomed him and Laura Adams, the other Middlemarch cop, and he enjoyed the forward thinking of a species some would call beasts. Laura had hooked up with a shifter, so the thought of becoming romantically involved with one didn’t perturb him. So far the feline shifters he’d met were decent, and he was proud to call them friends.

“Charlie,” Gavin said, sweeping him into a manly hug before he could speak or avoid the contact.

When their chests touched, Charlie’s cock bucked and an electric current surged through his body. A soft groan sounded and, mortified, he realized it came from him.

“Damn,” Charlie muttered, realizing this was more serious than he’d thought. He wasn’t sure what to do next, where to look. His stomach roiled with nerves and mortification.

Gavin pulled away slowly, his curly black hair falling over his forehead. His green eyes sparkled, crinkles of humor forming at the corners. Gradually heat replaced the amusement. He raised his right hand and brushed his fingers over Charlie’s jaw, the rasp a soft sound in the night, barely discernable above the chatter of the other guests. “Good.”

Charlie groaned again at the heat in Gavin’s eyes, the weight of his fingers now resting on Charlie’s shoulder, and moved out of the light into the shadows cast by a large oak. As he hoped, Gavin followed to the relatively private spot. “You knew?” He shook his head still unsure of where to look. He ended up scowling at his feet. “That’s embarrassing.” Helplessly, he glanced at Gavin, apprehension a jumpy sensation hollowing his stomach. “Good?” he demanded, Gavin’s words finally pushing through his self-consciousness to make sense.

The dim light screened Gavin’s expression, which gave Charlie hope. If he couldn’t see Gavin clearly, then the feline wouldn’t witness the tinge of color creeping into his cheeks. Memories of an awkward first date came back to haunt him. He’d thought age and experience would get him past discomfort and give him confidence. Not today. No, right now he felt like a green kid, panicking about how to kiss without bumping noses.

“It’s only embarrassing if I don’t return the feelings,” Gavin said, his voice a shade huskier than normal. He lifted his hand and stroked his fingers over Charlie’s cheek again before letting his arm fall to his side. “And I do, so what are we going to do about it?”

Charlie’s body pulled tight, awareness arcing between them, the silence throbbing with possibilities. He cleared his throat. “Damn it, man. Did you have to pick a public place to tell me?”

“I’ll be happy to tell you later, in private.”

“I must be out of practice.” Gavin paused a beat. “Yeah, I’m flirting with you. You know how it was between Jonno and Laura?”

“Yes,” Charlie said cautiously, remembering the atmosphere when the two were in the police station together—the way he’d felt like a voyeur. “You mean the mating thing?” He drew in a sharp breath when Gavin’s meaning hit him. “You mean we’re mates? That’s why I’ve been jumping out of my skin each time I see you?”

“Yeah.” No mistaking his tone for anything but satisfied. Gavin glanced over his shoulder. Charlie followed suit and saw no one was watching them. Gavin turned back to him and, after a slow grin, prowled closer, pushing right into Charlie’s personal space. Automatically Charlie stepped back until the tree trunk at his back halted his retreat.

“You’re not frightened of me?” Gavin whispered, his breath warm on Charlie’s face. “I’m a real pussy cat.”

Charlie’s fingers curved into Gavin’s muscular shoulders, neither holding him off nor drawing him closer. “That’s reassuring,” he said dryly. “I’ve seen Jonno’s teeth. I suspect yours are just as sharp.”

“All the better to nibble with,” Gavin said with a wolfish smirk.

“I suppose I should be thanking the gods you’re not a wolf.”

Gavin barked a laugh. “You fancy yourself in Little Red Riding Hood’s shoes?”

“Yeah, must have a fetish of some sort.” Amusement faded. “Seriously, what does this mean?” Charlie wanted to know even though he admitted deep down what other people thought wouldn’t matter a damn. The way he felt and the things he wanted to do with Gavin were more powerful than the thought of public condemnation. He might worry about the speed of the attraction if he hadn’t witnessed Jonno and Laura together along with the other feline couples. To hear them tell the story, the attraction was instantaneous and made stronger by sexual contact. It took a strong person to resist. “The mates’ thing between men. How does the shifter community view same-sex relationships?”

“About the same as humans. Some think gays are an abomination while others don’t mind. I’m hoping Saul Sinclair and Lucas Huntingdon will come tonight. Emily said she invited them. They’re mates.” A chorus of welcomes had Gavin glancing at the door. “Speak of the devil. Leticia’s here as well.” The way Gavin’s voice softened had Charlie frowning, glancing at the doorway. A tall, slender woman stood with Emily and two men. One male looked like many of the locals—tall with dark hair—while the other man was a big blond. But the woman, she stole his breath. She seemed all legs in her short red skirt. Her low-cut blouse showcased a set of stunning breasts without tipping over into obvious and tacky. Her profile promised beauty but he couldn’t tell what color hair she had because she wore a black hat.

“That’s them now. Come on. I’ll introduce you. Charlie?”

“Yeah?” He couldn’t take his eyes off the woman and wondered if she’d come with anybody. Probably. In his experience, women who looked like her were snapped up pretty quick.

Fuck, what was up with him tonight? He’d just admitted he was attracted to Gavin. He was genuinely interested in seeing what happened between them, but this woman…this woman drew him too. Weird. Plain weird. He couldn’t blame it on alcohol because he hadn’t had a single drink. Swallowing his unease, he dragged his attention off the stunner to give Gavin his total concentration. He hoped Gavin hadn’t noticed his fascination with the new arrival.

Gavin wore an intense expression, a glitter of arousal darkening his eyes. “Don’t bother looking at anyone else tonight. You’re coming home with me.”