One plus one equals three.

Tiger shifter Hari Daya takes one look at Ambar Patel’s photo and is smitten. Further research heightens his fascination. An arranged marriage would work, except the lady isn’t buying and tells him to take a hike.

Ambar is already involved with human Jake Quinn. Casual pleasure and lovin’ works best for her since she dreams of traveling the world and delving into new experiences. The frisson of heat and desire she feels for Hari is unacceptable. There will be no tiger mate for her.

Jake Quinn has no idea either his lover or his new friend are shifters, but there sure as hell is something weird going on in his head. As much as he enjoys sex with Ambar, he’s thinking about Hari too. Suddenly there’s kissing and togetherness way past his comfort zone. The slide into sinful pleasure with both Hari and Ambar is easy—it’s the relationship dynamics that give them headaches and make them wonder if they’re making a huge mistake.

“Rohan. Rohan!” Ambar stomped into the house she shared with her brother and his mate Kiran. The scent of freshly brewed coffee made her turn in the direction of the kitchen. She burst through the doorway and glared at them both before focusing on Rohan. 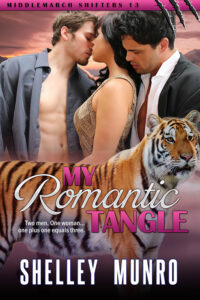 “I asked you to do one thing. One thing! And did you do it? Oh no.” She threw up her hands in disgust, her scowl intensifying.

Kiran took one look at her face and stood. “Maybe I should go.”

“I did so.” Rohan met her gaze without a hint of deceit. “I cancelled the contract with the marriage broker and told him his services were no longer required.”

“Then why did a man turn up in the store this morning and tell me he’d come to marry me?”

Ambar glowered at both men. “I pushed him out of the store, slammed the door in his face and hightailed it straight here.” She twisted the golden band on her right hand, the ring she’d inherited from her mother and wore to remind herself of her desire to live an independent life. While men were lots of fun, she didn’t need one to survive. She did not need a mate to complete her life.

“Why didn’t you bring him here? Or ask him to wait at the store and call me so we could sort it out?”

“I’m not marrying him, and you can’t make me.” She wrenched on the gold band again, trying not to think about him. Hari.

“Rohan doesn’t intend to force you to marry anyone,” Kiran said, handing her a mug of coffee. His unruffled manner went a long way to restoring her calm.

“I can’t believe you closed the store,” Rohan muttered. “How are we going to grow our business with you shutting shop at the slightest provocation?”

“Provocation? You call this provocation?” Ambar snapped, the fragile hold on her temper fraying again. “I supported you and Kiran. I expect you to tell this…this man to leave Middlemarch and never come back. I told him, but I expect he’ll only listen to a male.”

Rohan pushed back his chair and stood, circling the table to stand at her side. For a moment Ambar wanted to deck him then she saw the concern on his face. All the fight drained out of her. Deep down, she didn’t think he’d arrange a marriage for her. He knew she valued her independence, but he didn’t know of her desire to travel. She hadn’t confided her list of dream destinations to anyone.

“Finish your coffee and we’ll go back to the store together.”

Kiran chuckled. “Isn’t that what you want?”

“He was actually quite nice,” Ambar said, recalling his tentative manner. “He had an awful scar on his face. I’d hate for him to think I acted like a boor because I couldn’t bear to look at him. I think he was nervous.”

“Where was he from? Did he say?” Rohan asked.

“I didn’t give him a chance.” Ambar frowned, trying to recall his face in detail. Apart from the scar, she didn’t remember much. “He wasn’t from India. He sounded English to me.”

Rohan took a sip of coffee. “I wonder if Dad used a broker over in England as well as the one in India. There’s a large Indian community in Manchester and a smaller one in London. I didn’t find anything in the paperwork in the office. Did he ask to speak with me?”

“Of course he did. I was consigned to the little woman box straightaway,” Ambar said, her top lip curling in disdain.

“Why didn’t you just tell him to piss off?” Kiran sipped his coffee, studying her carefully like one of his animal patients. “Why did you flick your tail and run away? You know a male tiger’s typical response is to chase.”

She winged him a glare. “I did not flick my tail. I’m not interested in another man. You know I’m going out with Jake.”

Rohan’s brows rose and his lips quivered as if he was trying not to laugh. “But you did run away.”

All the hot air whooshed out of her at the challenge. Heck, they were right. Why hadn’t she told him to take a hike? She thought back and focused on everything she remembered about the man. His scar. His height—about four inches taller than her—and his English accent. She thought a bit harder and it hit her. His scent. He’d smelled familiar, and when she’d heard the tinkle of the doorbell, she’d thought it was Jake. She’d always liked the way Jake smelled. It was one of the first things that had attracted her to him, and from there things had advanced until they shared a bed on a regular basis.

A smile curved her lips at the thought of Jake’s muscular and very naked body moving against hers. She did love to sin with Jake, even if her parents were rolling in their graves with horror, shame filling them at the antics of their once virginal daughter.

Yeah, Hari had smelled much like Jake. Male chocolate, she thought with a satisfied smirk. Weird. She’d never come across anyone whose smell captivated her in the same manner.

Ambar nodded. “You’re right. I did run away. I panicked when he said he’d come to marry me. I don’t want to get married.”

“Jake is happy as he is—single. Besides, he’s too busy with the farm. Sometimes we go for a week without seeing each other.”

“Fuck buddies,” Kiran said with a grin at Rohan.

Rohan growled deep in his throat and both Kiran and Ambar laughed. They’d had this discussion before. Rohan said their parents wouldn’t approve, and Ambar always countered that he could talk, living openly with another male.

“I’ll talk with him,” she said, knowing she owed it to the man. “I’d hate him to think I ran off because I didn’t like the way he looked. I actually shoved him out of the store.”

“I think I only got away with it because I took him by surprise. He didn’t put up a fight. If he’d wanted to, he could have pushed back.”

“Which says a lot about him,” Kiran said. “The men I knew wouldn’t have put up with a woman shoving them around.”

Ambar stuck out her chest. “I’m not an ordinary woman.” The tilt of her chin dared them to say otherwise.

“As soon as I started reading MY ROMANTIC TANGLE I knew I would not be able to put it down. I was hooked from the first page. The chemistry between Ambar, Jake and Hari is intense and somewhat humorous….One of the nice things about this series is that Shelley Munro has made sure you can read book nine and not even realize you are reading part of a series. You will meet some of the characters from previous books as well as future ones I am sure but they are defiantly stand-alone books but if you are like me you will want to go back and read all the others.”
~ RomFan Reviews

“I just took a walk on the wild side with this story. An excellent read, done by an outstanding writer. You could not ask for more. I loved the storyline, was impressed on how she developed the story from start to finish.”
~ Reviews at Ebook Addict

“The emotions of our characters in Tiger by the Tail are raw and the lust is uninhibited. The way Ms. Munro describes the scenic Middlemarch makes me want to go there. The sex is scorching hot, the love is endearing, and the fears and loneliness were realistic and easy to relate to. Ms. Munro has created another captivating story in the Middlemarch series and I can’t wait for the next book. Bravo Ms. Munro!”
~ The Reader’s Roundtable After Dark